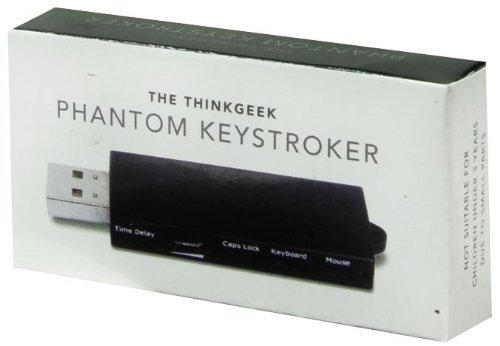 HIGH-TECH OFFICE-BASED PRANK DEVICE. With the advent of the incessantly-beeping and easily-concealable Annoy-a-tron, ThinkGeek ushered in a new era of sophisticated office pranks sure to drive your friends and coworkers bonkers while you quietly enjoy the chaos you’ve unleashed. The Phantom Keystroker may look like a harmless flash drive, but it’s actually a devious contraption of unlimited office-based torture. Simply discreetly attach the Phantom Keystroker to any extra USB port on your victim’s computer, no drivers needed. The Keystroker emulates a keyboard and mouse and periodically makes random mouse movements, turns on/off the Caps Lock, and types out odd garbage text and phrases. A set of switches allow you to choose amongst these tortures or select all three. You can also set the time delay on a sliding scale between annoying “events.” We recommend you don’t set it too frequently to extend the agony. Your hapless friends will think their computers have been possessed or that they accidentally downloaded malware. As they admit defeat and dial tech support, you can rest easy with the amusement of a prank well played. Note: The Keystroker will NOT take actions such as00111001000 – oh, hilarious guys – As I was saying, it will not take actions such as clicking the mouse button, and it cannot trigger the return, backspace, or delete key. We’re here to prank, not to run up someone’s credit card bill, submit any forms, or wipe out their hard work.HIGH-TECH OFFICE-BASED PRANK DEVICE – The Phantom Keystroker V2 looks like a harmless flash drive, but it will drive your friends and coworkers mad as you make random mouse movements and type out random texts and phrases.
SWITCHES AND DIAL – It has three different switches on the side. Choose between Caps Lock toggle, Keyboard typing (produce phrases such as “I see what you are doing”, and Pi to a bunch of digits), Mouse movements, or all three. It also has an adjustment dial to set the duration between pranks.
MATTE BLACK – Comes in a sleek matte black color. It has the following dimensions: 2 1/2″ long x 3/4″ wide x 1/4″ thick.
USB PORT – Can only be attached to a computer with a USB port. It will also work on any OS.
A THINKGEEK CREATION – The Phantom Keystroker V2 is a ThinkGeek creation and exclusive.

What is a Cryptocurrency Wallet? Simple To understand Video