When Manatee founder Damayanti Dapayana’s brother was diagnosed with autism spectrum disorder, the family took all the steps to ensure that he was properly cared for. All of the things that could have been an obstacle to getting treatment weren’t for Dapayana’s family.

A comfortably middle class background, a supportive family and ready access to care were all available, but still the therapy didn’t take. For Dapayana, it was witnessing the breakdown between the care provided at sessions and the differences in treatment at home, that led her to create Manatee.

“Therapy just sucks for kids,” Dapayana said. “My brother hated it.. It can’t be the best thing for children to put them in a room with an adult and have them talk about their problems for an hour.”

Now the graduate from Techstars Los Angeles has $1.5 million in funding from investors including the Michigan-based investment firm, Grand Ventures; Telosity, a fund launched by Vinaj Ventures & Innovation, that invests in companies improving children’s and young adult’s mental health; and the American Family Insurance Institute for Corporate and Social Impact, will pursue clinical validation for its suite of apps and services to provide a continuum of care for children with cognitive and behavioral disorders.

Beginning with Children’s Hospital Los Angeles, Manatee has started a trial with ten clinicians and fifty families to evaluate the commercial use case for Dapayana’s service.

The first targets for care are anxiety and oppositional disorder, Dapayana said. 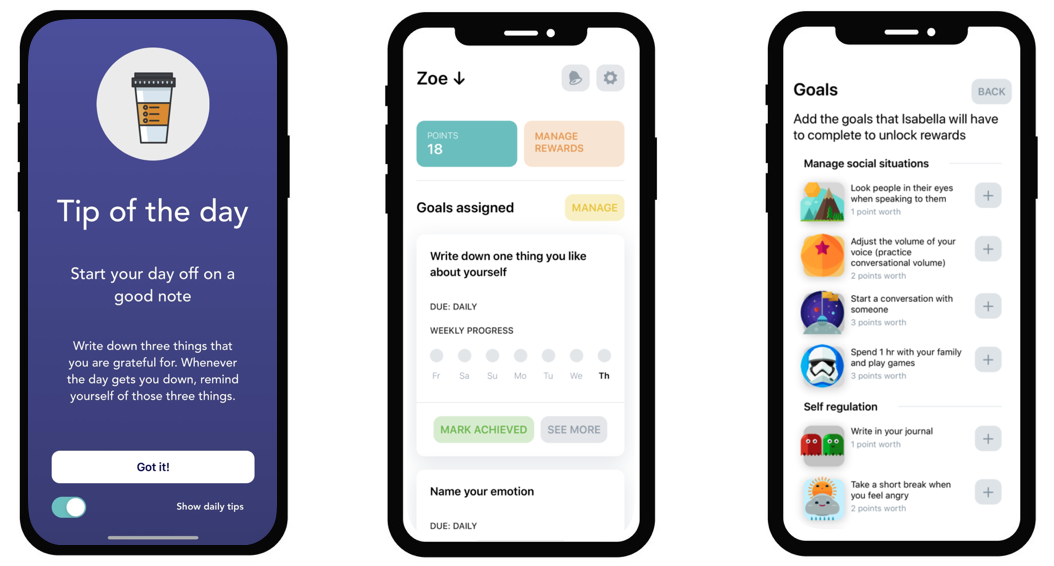 “I really want to focus on children. From a social [return on investment] perspective it seems insane to me that we don’t invest more in the early wellbeing of children,” said Dapayana. “If we did then we probably wouldn’t have to deal with a  ballooning juvenile detention system.”

From the company’s earliest days the stars seemed to align for Dapayana. She found her technical co-founder, Shawn Kuenzler, thanks to a post on AngelList. A veteran in the health tech startup world, Kuenzler ran engineering at Health Language and Zen Planner and has two exits under his belt. If that wasn’t serendipitous enough, Kuenzler’s wife is a clinical psychologist.

The two Denver-based entrepreneurs then took their startup on the road to the Techstars Los Angeles accelerator. It was there that they were introduced to contacts at companies including Headspace and LA Children’s Hospital that are paving the way for clinical validation of digitally delivered cognitive behavioral healthcare.

“We’re going to spend money and resources on launching our research with Children’s LA to understand the impact for a health system,” Dapayana said. “We position it as everyday therapy for kids. We provide the platform for providers to make it the day-to-day therapy for kids.”

Manatee sells its services directly to healthcare systems to ensure that it can reach the broadest population of users rather than just ones who could afford to access the company’s app-based offerings. Doctors use Manatee as a clinical dashboard and way to communicate to both a child and their family around care plans and treatment.

“I thought about this really long and hard… Looking from my personal experience. Parents and families that have kids with autism… there’s so much snake oil that gets pushed down their throat that they’ll try anything,” Dapayana said. “It was very important to me that one i understand the clinical workflow and understood how the workforce manages behavioral healthcare and whether the work we were doing was valuable.”

What’s up with tiny checks at giant valuations? – TechCrunch